The long and short of it: Using the Myth-Fantasy curriculum in the classroom setting and individually. 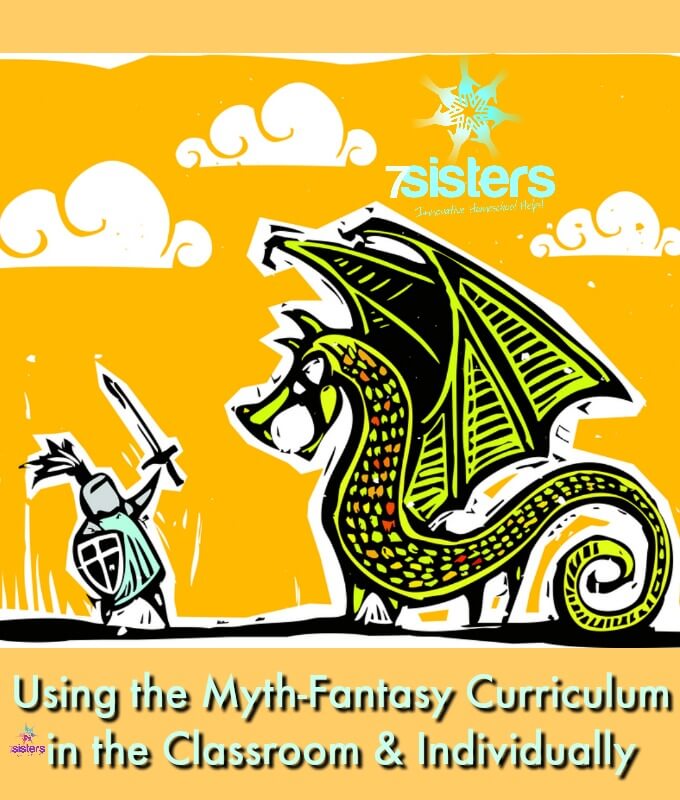 Using the Myth-Fantasy Curriculum in the Classroom Setting and Individually

One of 7Sisters most popular writing eworkbooks is our Myth-Fantasy Short Story Writing Guide. The guide ushers homeschool high schoolers through a step-by-step process that ends in a completed 5-page story in the style of J.R.R. Tolkien’s Lord of the Rings and the Hobbit and C.S. Lewis’ Chronicles of Narnia. (Check out the free suggested syllabus for Myth-Fantasy Writing.) 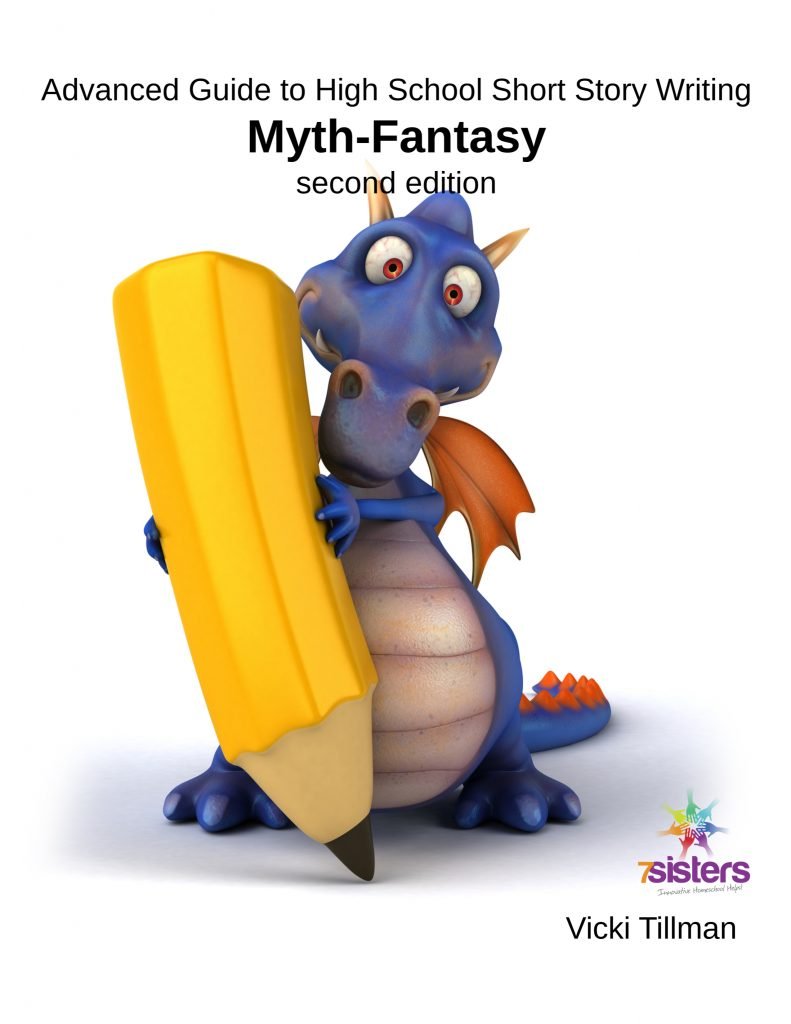 Both Tolkien and Lewis followed a general format of fantasy writing (they called the stories *myths*) that is similar to the ancient Norse and Greek myths. The popularity of The Lord of the Rings and The Chronicles of Narnia opened the door for the current wildly popular fantasy novels.

We have found that once teens learn that writing a Myth-Fantasy is not only do-able but it is FUN, even the shyest writers have gotten excited about the project.

We have also found out that Myth-Fantasy Short Story Writing is a great project for homeschool co-op and group classes. Even the teachers get into the act!

In fact, at Mt. Sophia Academy, the homeschool umbrella school that our teens attended, Myth-Fantasy is a popular course. However, it is not just a popular class because the subject is fun and inspiring. It helps that the teacher is fun and inspiring. Homeschool dad (and fantasy novel writer), Will Hahn, is a favorite teacher with our local high schoolers. If Mr. Hahn is teaching the class, whether it is History or Writing, teens sign up!

Using the Myth-Fantasy Curriculum in the Classroom Setting and Individually, we asked Will if he would write about his experiences teaching Myth-Fantasy Short Story Writing. So he did. (Even if you aren’t planning to teach Myth-Fantasy writing this year, you’ll get a kick out of his thoughts, so read on…)

Two years ago, I was asked if I had any interest in teaching the Myth-Fantasy section of a writing course. My first reaction was that honestly, I would have to say “yes”, but then should probably arrange to flee the country. Yet all went well in the end for me, and I’m sure you can do the same with this marvelous curriculum. I can say that because it not only has worked for my students, both last year and this, but also for me!

I’ve been pursuing a vocation as an epic fantasy author for eleven years now. You know the sort: massive tomes that tell you of another entire world. Multi-color maps in the front, genealogy tables in the back, detailed descriptions of magic and monsters in between. The kind of volume that serves double-duty, because when you’re done reading it, the book can prop open a fire door. I have four major tales out at present, on average over 150,000 words each.

I’d been privileged to help with some of the History classes at the Mount Sophia Academy where my daughter studied—that was my college major and former career—which brought me into contact with the “sisterhood”. They say the 7th sister is you, but I’m not sure if they really expected to partner with the “Y” chromosome! It’s been a miraculous experience, and I was certainly tempted to take on the challenge of talking about creating fantasy tales to these students, many of whom I already knew from History classes where we had looked at, for example Greek Myths.

It was just that short part that scared me.

Did I mention I write really long tales? The idea of compressing the arc of a story into the format of myths, fairy tales and other daunting literary forms was certainly intimidating. I was thinking at first only about teaching this, and could follow the curriculum of course, but worried that I would lack any real authority, since my own work was, in many ways, the opposite of what I’d be assigning.

Students are often intimidated about writing in fantasy or myth. These are tales that have to “ring true”, they’re rife with meaning and naturally school-aged kids don’t typically feel qualified to have such opinions. Maybe you feel the same way!

I knew I needed to encourage them to dive into their own thoughts and feelings, about what was important to them, the lessons they always knew and how those things work out in a story. I was inspired by John Eldredge’s book Epic in which he points out that we are all, always telling each other stories. In fact, we each tell THE story, the same story that comes to us with our mutual creation and leads us to the same place in the end.

Using the Myth-Fantasy Curriculum in the Classroom Setting and Individually, since the class course was seven weeks and the curriculum has only five lessons, I spent the first week showing the students classic myths (I chose Perseus and the Medusa as well as Eros and Psyche), to get them in the mood and talk about the eternal truths that people of ancient times could sense, even before the coming of Jesus. I tried to show them how the myths contain very personal stories about the hero’s progress, and I urged them to see themselves in one of the stories at some point. 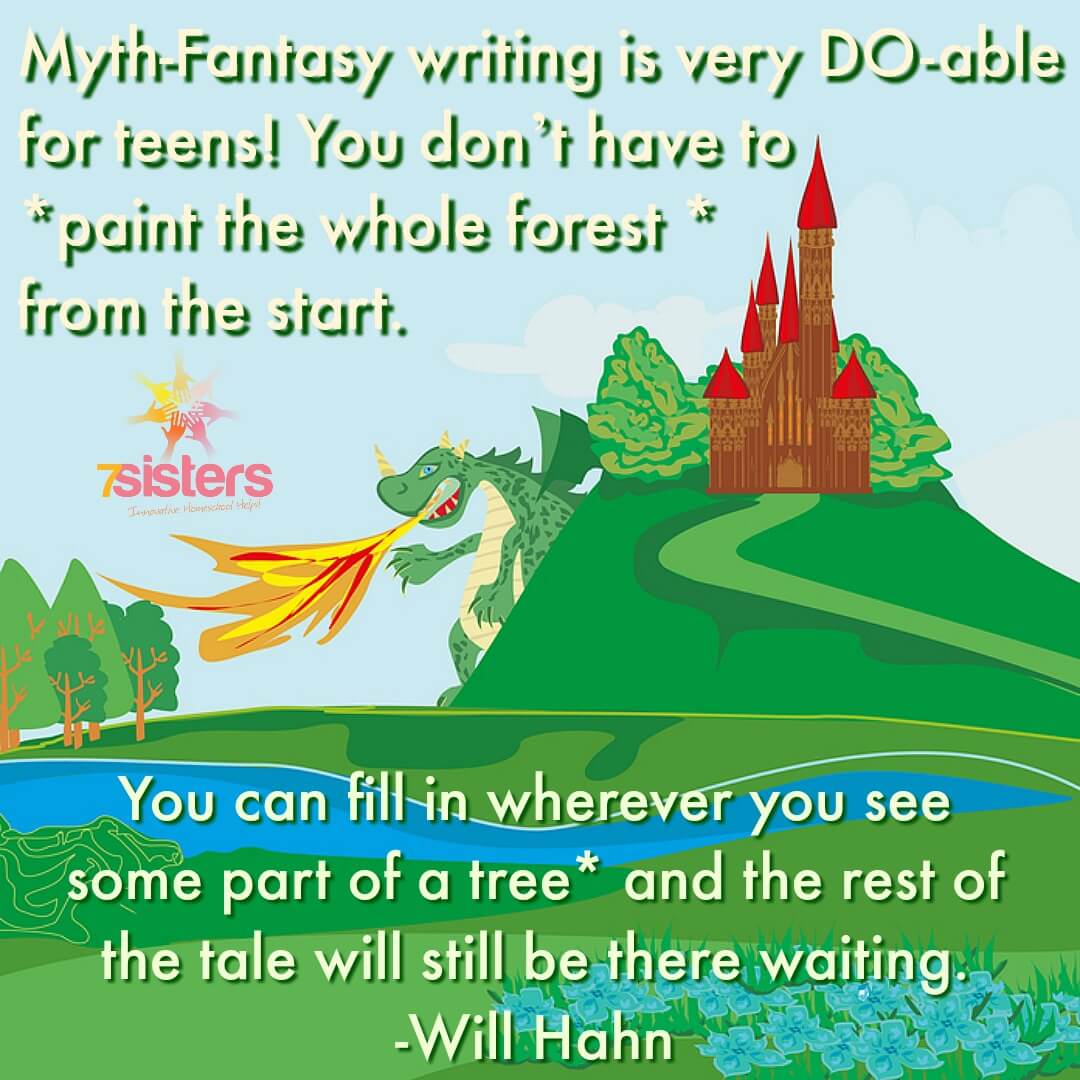 I looked over the curriculum and was frankly horrified at first by what I saw. This Myth-Fantasy Writing workbook shows you how to take this wonderful, truthful, magnificent (and I always thought really LONG) tale-form and broke it down into lots of little pieces. How dare anyone, what an outra–, hey wait a minute:

That’s when it hit me. If I really wanted to teach this course, I should take it.

There are great reasons for me to try writing some shorter tales. It adds to my canon, helps introduce readers to my style, and I can give away a short story for free to stir interest. I. Just. Never. Could. Or so I thought.

But now I decided to drink the Kool-Aid, as they say. And I announced to the class I would be doing the assignments right along with them (actually one week ahead). Writing my own Myth-Fantasy short story was good for me because:

Tips and Tricks for a Happy Ending

My students produced stories that were awe-inspiring, and I could not have been more pleased with the sincere effort they put in. I used PowerPoint slides for most weeks in class.

I wrote a shorter tale each of the two years I have taught the course and I believe they rank among my best work. I look forward to using them perhaps in an anthology, or in a give-away contest online. They might even lead to new novels and more full-length tales for me! In the meantime, here are two other short stories I wrote, for free!

Here are some tips for teaching Myth-Fantasy Short Story Writing to your teens, co-op or group classes:

Myth and fantasy will always have an important place in the human experience. See it for yourself when you teach this fabulous section!

You’ll also love this post by Will Hahn about The Christmas Carol. (When he teaches this in our local homeschool high school British Literature classes, our teens LOVE it!)

Using the Myth-Fantasy Curriculum in the Classroom Setting and Individually