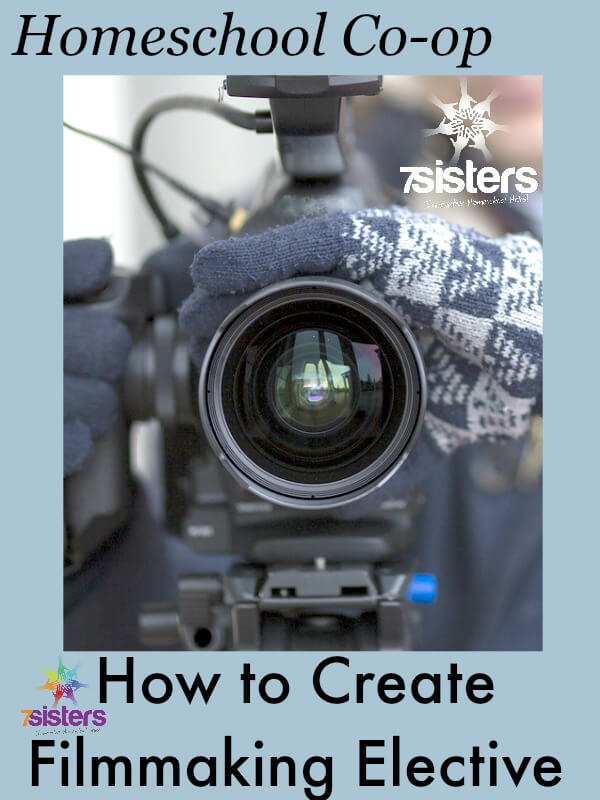 How to Create Filmmaking Elective in Homeschool High School Co-op

One important aspect of Career Exploration is rich experiences. Rich experiences don’t need to become your teens’ career, but they are good for exploring and/or eliminating possibilities.

Co-op is an awesome place to do SPARKLE, Career Exploration electives. Several of the 7Sisters’ high schoolers have loved earning Filmmaking credits in homeschool co-op!

Here are some tips for how creating a filmmaking elective in homeschool high school co-op:

Teen love learning filmmaking skills. The fun is increased in a group setting, so co-ops are perfect for a filmmaking course. Follow these tips.

1) Base the credit on a Carnegie Unit

2) Find a happy curriculum to work on together

We used Filmmaking for Dummies and Teach Yourself Filmmaking. We discussed the topics in the books together in the group.

In class we watched great movie scene clips (chosen for camera work, dialogue, acting, etc) suggested by the students or moms. We would discuss what made those clips great.

Many movies (The Lord of the Rings was great at this) have terrific extra material that gives a behind the scenes look at how scripts are written, camerawork is done, crews work together. Our teens had lots of great discussion based on viewing LOTR extra material.

Each month, we broke the teens into teams, gave them a Bible story to script, film and edit. They filmed on their own inexpensive video cameras and edited on their Movie Maker programs. Simple but good for application of what they had been learning in class. They then showed their projects in class.

6) Have a yearly film festival:

Each spring, the high schoolers had their own film festival and invited the local homeschool support group to come. We had a panel of judges that voted on numerous categories- a number of awards were given. (These awards looked GREAT on their transcripts!)

Our teens were able to go to a couple of film festivals. We vetted them, of course.

Filmmaking was my son, Ezra’s passion. He ended up with several credits on his homeschool high school transcript. Then he went on to study it at college. His skills were a great asset in many of his classes at Lancaster Bible College– many of his projects for courses are produced in video form. Sabrina’s son, Sam, has produced several independent films since high school.

Ezra is currently producing a series of time-lapse videos of his illuminated book of Jude.
Epistle of St. Jude Time Lapsed

For more on how to teach homeschool co-op classes, check this post.

How to Create Filmmaking Elective in Homeschool High School Co-op