I thought it was useful to share a response to Harvard Magazine’s Risks of Homeschooling article. 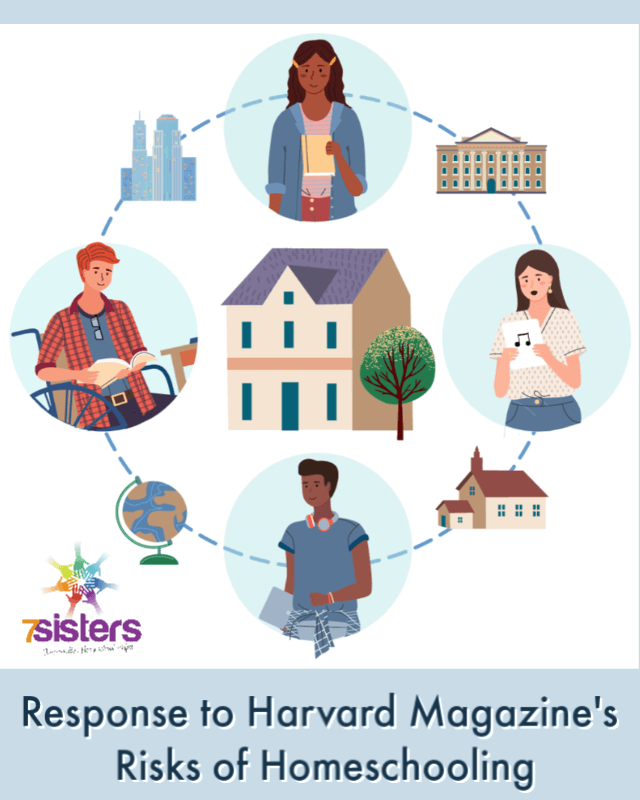 I suspect someone slipped the article “Risks of Homeschooling” by Erin O’Donnell into the May/June 2020 online edition of Harvard Magazine without the editors noticing. Why else would an institution that holds rigorous standards for research and information allow such blatant yellow journalism?

One of our 7th Sisters suggested that perhaps they needed some click-bait to get their numbers up. Well, it worked. When I read the article, it appeared that the comments were already turned off. (Too many? Too many people speaking up for homeschooling?)

What does the article, “Risks of Homeschooling” say?

The May/June 2020 online edition of Harvard Magazine includes and article by Erin O’Donnell based on the work of Elizabeth Bartholet, Wasserstein Public Interest Professor of Law at Harvard and Faculty Director of the Law School’s Child Advocacy Program. Bartholet sees homeschooling as a problem. She:

“…sees risk for children- and society- in homeschooling, and recommends a presumptive ban on the practice.”

Why is homeschooling a risk to children and society, according to Bartholet?

“Homeschooling, she says, not only violates children’s rights to a ‘meaningful education’ and their right to be protected from potential child abuse, but may be keeping them from contributing positively to a democratic society.”

Bartholet’s first complaint about homeschooling is that it has few regulations in each state:

“…if you look at the legal regime regulating homeschooling, there are very few requirements that parents do anything.”

She complains that “only about a dozen states have rules about the levels of education needed by parents”.  She complains that, “This means, effectively, that people can homeschool who’ve never gone to school themselves, who don’t read or write themselves.”

Bartholet also worries about child abuse. She suggests that teachers are mandated reporters who “constitute the largest percentage of people who report to Child Protective Services”. She follows this comment with the story of Tara Westover in the book Educated (the story of a young woman who escapes an isolationist, abusive, “homeschooling” family- where little education took place), implying that homeschooling families are all potential Westovers.

While Bartholet admits that people homeschool for a variety of reasons, she says that “up to 90% … are driven by conservative Christian beliefs, and seek to remove their children from mainstream culture.” Furthermore some parents are “‘extreme religious ideologues’ who question science and promote female subservience and white supremacy”.

That’s a lot of inflammatory language and ideas, and I would like to share a gracious but thoughtful response.

What was wrong with the Risks of Homeschooling article?

Allow me to approach this in several different ways:

Response to Harvard Magazine’s Risks of Homeschooling: Homeschoolers at Harvard

We might wonder how this article made Harvard’s own students feel. At the very least, it is sending mixed messages by accepting and promoting homeschoolers on the one hand, while presenting homeschooling as ineffective and dangerous on the other.

We were all homeschoolers during the pandemic

We might also wonder how this article make American families in general feel. What does it say to every parent who is now being required by the state to homeschool their children because of the pandemic. Wouldn’t it have been more productive to help American parents by pointing them to the many resources homeschoolers have developed over the decades for effective education at home?

The poor scholarship of the article

I would have thought that Harvard publications would present information that was based on good research practices. It has been a long time since I was in grad school but I remember several important research principles.

(BTW-For those of you who are not used to reading Law Review articles, it would be a good academic exercise to read through this with your homeschool high schoolers. Then, after you discuss it, read Forbes’ article in response to “Risks of Homeschooling” which accurately points out the lack of scholarship: Harvard’s Lazy Attack on Homeschooling.)

One research principle is to never generalize information based on an outlier (such as the Westover family) to an entire population.

Another good research principle is to be accurate about your demographics. Bartholet did poor work on demographics. For instance:

Another good research principle is to do a literature review.

A literature review discusses the current research that is available on the topic. In this case, the topic is homeschooling.

Another good research principle is to use research to draw conclusions

Bartholet was greatly concerned that poorly or even, uneducated, parents could be training their children.

In addition to the article’s failure to follow good research practices, I would not be surprised if it were based on a lack of personal experience with homeschoolers.  For 18 years I advised hundreds of homeschool high schoolers who went on to college (including Harvard), into military service (including the academies), into trades and religious vocation, etc. They vote and work for positive social change. They serve and interact in their communities in healthy and caring ways.

Response to Harvard Magazine’s Risks of Homeschooling: The problem of intolerance

Bartholet feels that homeschooling should be banned, in part because:

What should we do about “The Risks of Homeschooling”?

There are several things we should do about Harvard Magazine’s article:

If you know anyone who is, like Bartholet, torqued about homeschooling, invite them to visit the many homeschool websites full of helpful information.

7SistersHomeschool.com is one. Have them start with our Authoritative Guide article series:

There are hundreds of homeschool organizations with lots of information on homeschooling successfully and happily. Here are just a few favorite posts from a few of our friends:

Can homeschool graduates succeed? Check out what some of them are doing!