Societies throughout time have established class systems. Whether the rules for separating classes were formal and rigid or informal thought that groups people by social, economic or educational status, the class system reveals a lot about a society. This is where literature can meet Sociology: high school books about class systems. Good literature that examines the strengths and weaknesses of various classes makes for rich learning in high school. 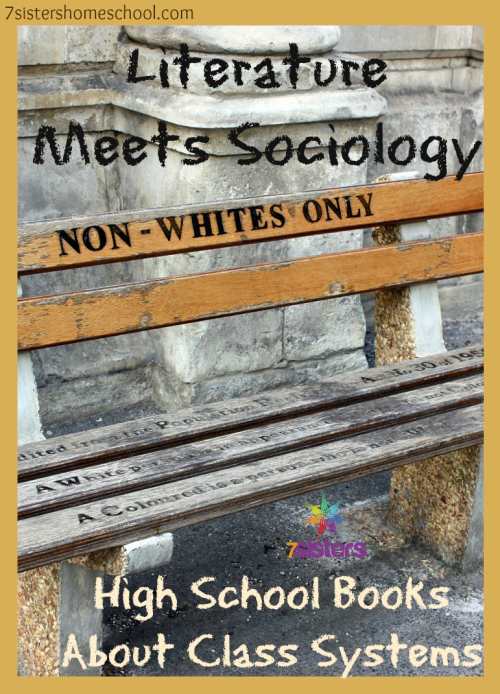 Immigrants to America who struggled to succeed against desperate odds inspire us to persevere and to learn to respect differences in others.

Novels like Betty Smith’s A Tree Grows in Brooklyn or Upton Sinclair’s The Jungle paint vivid pictures of American immigrant life in the early 20th century.

African American stories reveal much that is painful about our nation’s history, and remind us of the importance of refusing to allow that history to repeat itself.

Harper Lee’s To Kill a Mockingbird, Lorraine Hansberry’s A Raisin in the Sun, and Mark Twain’s The Adventures of Huckleberry Finn provide sobering fuel for discussion with high school homeschoolers. Looking to other countries that have enforced the oppression of people of color, South Africa’s story of hope in the midst of apartheid, Cry, the Beloved Country by Alan Paton, is rich and beautiful literature.

Women have typically been classified differently than men within a society.

Look across the Atlantic to England and read Jane Austen’s novel of manners, Sense and Sensibility, or turn your attention to Ancient Greece and weep for the plight of Sophocles’ Antigone. Here in America, Nathanael Hawthorne’s Hester Prynne wore The Scarlet Letter and became an icon of women struggling within the societal class system of their time.

What about the privileged rich?

Many fascinating novels have been written about this class in countries around the world. Anton Chekhov studies the idle rich brilliantly in his play Uncle Vanya, set on a country estate in Russia. A cautionary tale, The Picture of Dorian Gray by Oscar Wilde has much to say about the wealthy upper classes in Great Britain 150 years ago. Here in America, F. Scott Fitzgerald’s The Great Gatsby is a chilling look at the rich and troubled folks of Long Island during the Roaring Twenties.

What titles can you recommend for studying class systems through literature?